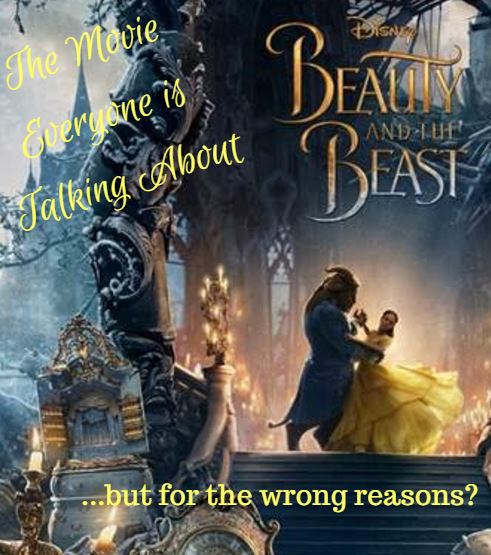 If we could all learn to love like Belle….that’d be great….

I know all sides have an opinion but I just saw it today and I wanted to wait until I had seen it to chime in also.

I’m not here to debate what the Bible does or doesn’t say about certain sins.  We are all sinners and I thank God that He had mercy and sent Jesus to save my eternal soul (and yours!) because without that we’re all in the same sinking boat.

I want to tell you what we should be talking about from the movie.

If there hadn’t been a “news story” (or ten) about the infamous “moment” you would’ve missed the moment.

There were two, (maybe three?) “moments”.  (I’ve decided to include them at the end of the post if you want to know.)  But I wouldn’t have thought anything of these “moments” if I hadn’t been looking for them.   And I hate that I was looking for them.  I hate that my favorite childhood movie brought to live action was tainted by someone trying to push an agenda.  I spent part of the movie seething at the fact that a politically charged comment and the backlash that came from it almost ruined my movie.

I’m mad that I had to be cautious about being excited about the movie.

I’m mad that I had to think twice before I told people I was going to go see it.

I’m mad that people that are supposed to represent my community tried to make me feel shame for wanting to see the movie – BEFORE they even knew what was in it.

Guys and gals, the knee-jerk reaction that people of faith responded with has hurt our witness.

I feel like the “comment” was made before the movie came out just to invoke that knee-jerk reaction from the conservative crowd.  The progressive crowd wanted us to loose our heads so they could point and scoff and use this against us from now on.  “Remember when those loving Christians went bonkers about 3 seconds of a movie?”  “Remember when people boycotted a movie no one had seen yet because of what someone said was in it?”  The collective “we” played right into it.  The “worldly” crowd pushed a button and made all the “Jesus freaks” heads explode.  And for what?  Nothing.  Nothing at all, I tell you.

I’m reminded of something I’ve read within the last year and I wish I could remember where so I could give proper credit.  But the essence of the comment was, Christians need to stop acting surprised when the world acts like the world.  Guys, this movie was made by worldly people.  So unless you own zero books or movies published by anyone other than a Christian publishing company and you never turn on prime time network TV or cable, unless it’s a Christian network, you need to get your knickers out of a wad.  Because you can’t be okay with one worldly show/movie/book and not another.   There was no foul language or sexual content in this movie which is more than you can say for network television.

So what should we be talking about when it comes to Disney’s Beauty and the Beast remake?

I’m glad you asked.  There were so many beautiful things about this movie.  Like the enchantress says in the story, “Beauty is more than skin deep.”  The “beauty” in this movie goes deeper than what a couple of interviews say.

There is a solid 10 seconds of the movie where there is a giant crucifix fully in the frame. Let’s talk about how beautiful that is.  Christ’s sacrifice on the cross on screen for 10 seconds (which in a fast-paced movie is a significant moment) or possibly more – it didn’t occur to me until the scene was almost over to count how long it was.  They didn’t have to include that.  There were no crucifixes in the cartoon version.  The “bookstore” that Belle visits in the opening song, in the live action film, is really just a shelf of books inside the town’s church kept up by the priest. There is no real reason for them to make that scene that way.  But there it is.  There is a priest, a church and a large CRUCIFIX in the film.   Did you see any of the “worldly” crowd blowing a gasket over that?  I didn’t.

Aren’t we all “beasts” – “cursed” by our sins and in need of the redemption of love?  In case you’re not sure how to answer that, it’s yes, yes and YES.  My gosh, we are all ugly in our sin, hideous creatures until the love of Christ changes us (like Belle’s love transforms the Beast at the end.)

The Beast was essentially her enemy and yet in his time of need (after being attacked by wolves) when she could have run away, she saved him.  Wow.  How many of us have a hard time being nice to a co-worker that annoys us?  Could you save the life of your enemy?  How many of us look the other way when there is someone in need?  Belle shows the compassion of the Good Samaritan when she choose to save the Beast even though it means losing her freedom.

Can we look more than skin deep for once?

The beauty of this movie is that we can say “Look at that.  THAT’S what Christ did for us.”   If you know someone that is not a believer but that has seen the movie, you can use that as a gateway to a conversation with them.  “I saw the movie too.  It was beautiful.  The way Belle’s love transformed the Beast at the end reminds me of what God’s love did in my life.”

Maybe, just maybe, even we, followers of Christ, could learn a little about showing love from this movie.

Don’t let your witness be ruined because you sided with the group that is yelling the loudest.  That’s not how you win people to Jesus.  Boycotts don’t win hearts.

Don’t be afraid to go see the movie.  Read my “regular review” here.

What are the supposed “moments” in the movie?

Well, first off, let’s be clear, LeFou obviously has something for Gaston.  Whether it’s “hero worship”, a serious man-crush or romantic feelings we all know LeFou follows Gaston like a puppy and does whatever he asks.  That’s evident even in the cartoon version.  The live action version makes it seem more romantic – but again, I don’t know if it’s because I was looking for it to be that or not.

In the tavern during the “Gaston” song, LeFou is singing to Gaston – again, we know he holds some form of idolization/affection for him.  During some parts of the song he gets uncomfortably close, but he’s always rebuffed by Gaston for doing so.

During the fight scene between the villagers and the castle residents the wardrobe attacks three guys and dresses them as women (in the cartoon it was just one guy.)  Two of the guys run off screaming (like the cartoon version) but one guy smiles before he runs off – giving the impression that he would rather be dressed like a woman.  It was less than two seconds.

In the final dance scene the whole ballroom is filled with dancing couples doing a choreographed number.   They switch partners back and forth occasionally and in one part LeFou and another man find themselves mistakenly matched up and they choose to continue the routine.  It’s at most three seconds of the film.