I can’t wait to start sharing with you a great book every week that we have enjoyed that I think you should read also!

Here is the first week’s book! 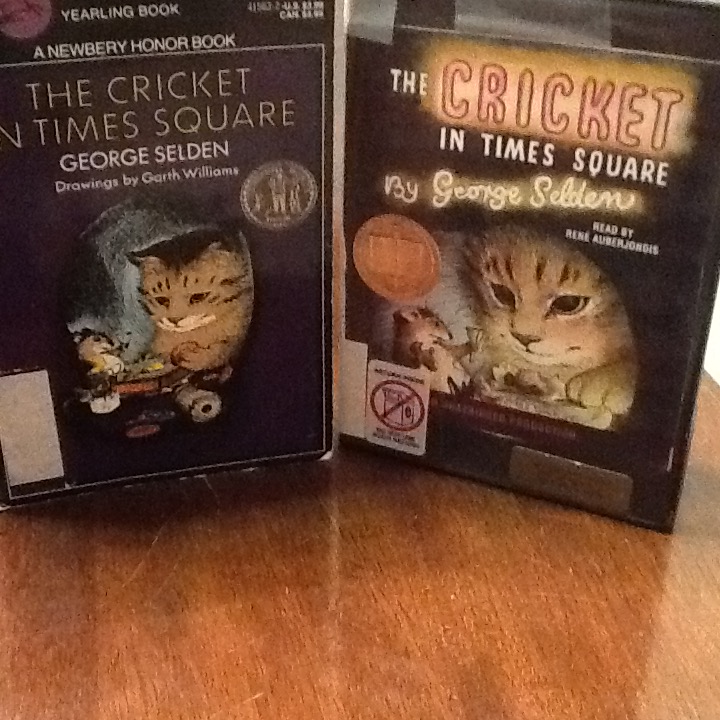 The Cricket in Times Square – by George Selden

Tucker is a streetwise city mouse. He thought he’d seen it all. But he’s never met a cricket before, which really isn’t surprising, because, along with his friend Harry Cat, Tucker lives in the very heart of New York City―the Times Square subway station. Chester Cricket never intended to leave his Connecticut meadow. He’d be there still if he hadn’t followed the entrancing aroma of liverwurst right into someone’s picnic basket. Now, like any tourist in the city, he wants to look around. And he could not have found two better guides―and friends―than Tucker and Harry. The trio have many adventures―from taking in the sights and sounds of Broadway to escaping a smoky fire.

Chester makes a third friend, too. It is a boy, Mario, who rescues Chester from a dusty corner of the subway station and brings him to live in the safety of his parents’ newsstand. He hopes at first to keep Chester as a pet, but Mario soon understands that the cricket is more than that. Because Chester has a hidden talent and no one―not even Chester himself―realizes that the little country cricket may just be able to teach even the toughest New Yorkers a thing or two.
(source)

This has been a delightful book that we are enjoying immensely.  But I feel like a good part of the reason we’ve enjoyed it so much is because we are listening to it on audio.

We listen to a lot of audio books – when we’re traveling or to give mom’s voice a break or just because a certain book was available on audio.  But this is one book I would specifically recommend listening to on audio.  The different character voices, background sound effects and most importantly, the cricket chirping, really enhance the story.  I mean, after all, Chester Cricket is no ordinary cricket – if you don’t have the book on audio, you miss out on hearing Chester chirp The Blue Danube or Onward Christian Soldiers.

The Cricket in Times Square is a 1961 Newbery Honor Book.  Great book, great story, but listen to it on audio for a real treat!