What Public School Gets WRONG About Socialization

What Public School Gets WRONG About Socialization

I thought we were past this but here we are having the Great Socialization Debate…. again.

I was pretty annoyed to read this post entitled What Homeschool Gets Wrong about Socialization on PopSugar Moms.  It can be equated to nothing more than an opinion fluff piece as the author backs up her opinion with ZERO facts or data.  She claims to be a former public school teacher and she bases her opinion on a handful of “previously homeschooled kids” she encountered as a public school teacher.

Now, here’s a logic exercise for you.  Not all homeschool kids that go back to public school are failed homeschoolers.  But if homeschooling is not working for a child, where do they end up?  Back in public school.

I want to stop here and say I love all my public school teacher friends and my beef with the system has nothing to do with them.  It would be like being mad at my doctor and nurse friends because medical insurance is a mess.

So in the article, she is saying that homeschool fails at socialization based on a few (she never says how many – my gut says she only encountered one or two) children who had to go to public school that, quite possibly, did so because homeschooling wasn’t working for them.

Again, let me rephrase what I said a few paragraphs up – not every child returns to public school because homeschooling didn’t work.  There are many reasons why a homeschooled child would return to the school setting.  HOWEVER – if homeschooling does not work for a child or is not done right, then there is only one option for that child – to return to a traditional school setting.  The writer of the article in question had zero experience with any homeschool success stories.  The extent of her homeschool experience consisted of a couple kids who had trouble adjusting when they entered public school.  (Which begs the question – did she actually help said children adjust to a new setting or did she just sit back and watch them flounder to prove her biased opinion that homeschoolers aren’t socialized?  Also, if she’s a former teacher, how long ago did she encounter a homeschooled child?  Homeschooling has changed a lot in just 5 years and has changed DRAMATICALLY from what it was a decade ago.)

Ok, back on point.  Her assessment of all homeschoolers based on meeting a couple kids is basically her judging an entire group of diverse people across the country based on 0.000001% of said groups population.

(Do the math: roughly 2 million current homeschoolers in the US, not counting already graduated success stories – 2 people out of 2 million is 0.000001%)

So here is what I think PUBLIC SCHOOL gets wrong about Socialization backed up with, you know, facts, and data and stuff.

What Public School Gets Wrong About Socialization

1. “Forced Association” is not “Socialization”

When you say kids need to go to school to “socialize”, what you are saying is that kids need to be put in a room of 20-30 other kids based solely on the fact that they are the same age and live in the same general area.  That’s forced association.  The kids have no real choice in who they choose to be around.  And they may make a friend one year and the next be separated because they don’t end up in the same classroom again or they get split into different schools (for example, there is a middle school in my area that serves two areas but then at the high school level some kids go to one and others to another)

Is that really how you want your child learning their manners and habits?  From other kids that are chosen randomly to be in the same room?

The “kids need to be bullied so they know how to handle it” argument does not fly with me.  And, yes, I have seen that argument thrown around.  Bullying is so commonplace and prevalent in schools that people EXPECT their child to be bullied!  There is something wrong with that.

And while US schools don’t rank very highly in education compared to other countries (here, here, here and here and more I got tired of linking to) – they fall in the top ten for number of bullied teenage girls.

And really, when kids are at their most impressionable ages, do we want them surrounded by peer pressure and having that shape their minds and teaching them to take the advise of other kids?  Or do we want them in the home where we can model our moral values as a family and impress them on our children’s moldable minds and character?

3. School Violence is on the rise

As if bullying and peer pressure weren’t enough, school violence is on the rise.  So much so that the CDC considers it a public health problem.    In 2013, 12% of students 12-18 years old report gang activity at their school (according to the CDC).  Also, from the same source, 4% of students surveyed admitted to carrying a weapon (gun, knife or club) to school in the last 12 months and 6% reported having been threatened or harmed with a weapon in the last 12 months.

No, not every school is that bad.  Yes, there are some good school districts.  But still, it feels a lot like playing Russian roulette with my kid’s safety.

5. Sitting behind a desk all day is not the “real world”.

I get so tired of hearing that kids that are homeschooled are sheltered and don’t get out in “the real world”.

Since when is being confined in the four walls of a school sitting behind a desk the “real world”??

I would argue that it’s HOMESCHOOLERS that are out in the real world.  This myth that we stay locked in our houses all day every day is nonsense.

G isn’t 9 yet and he can order and pay at a restaurant or for small items at the convenience store.  He’s learning how to make bank deposits. He helps me shop for groceries – he knows how to pick eggs, check dates on milk and find the freshest produce.  Why?  Because he’s with me every time I do these things.

He’s had several opportunities to work alongside me volunteering during “school hours”.   We get to travel more because we’re not confined to school hours and days – he knows how to read a map and is learning how to travel and navigate a new area.  Not only is he learning important life skills but he’s interacting with adults and learning “real world behavior”.

We enjoy going to the park on nice days during “school hours”.  He’s an only child so he knows that if he wants someone to play with at the park he has to find someone.  Unless we happen to bump into other homeschoolers, his playmates usually consist of kids under 6 that wouldn’t be in school.  And you know what?  He’s fine with that.  He’ll walk up to a kid and ask them to play.  And he’s kind to them, finding some common ground for them to play on.  (My favorite time was when he was playing follow-the-leader with four-year-old twins at the playground.  He was leading them around the playground and they were all having the best time!)   At our fabulous co-op, he regularly plays ball with a group of boys that range in age from 10-16 that treat G the way he treats those kids younger than him on the playground.  With kindness and encouragement.  Treating him like he belongs.

When you divide and group children by age you’re setting them up to gravitate toward that grouping and to look down on younger kids (they’re so “babyish”) and then the kids older than them look down on them also.  And suddenly, they view kids older than them as “cooler” and something to attain to be.  (I can’t wait until I’m such-and-such age so I can be like this person/do what they do).   Instead of teaching kids that they can associate with kids of all ages and get along and work together.

So G regularly deals with “real world” situations with kids younger than him, kids older than him and adults.  Situations that would not happen in school.

It’s kids stuck in school buildings that are missing out on the real world.

6. There isn’t really time to “socialize” at school.

How many of us had a teacher in school that told us we were “there to learn, NOT to socialize”?  I know I did!  And to make matters worse, schools are cutting recess!  (Here and here, also.)  With no free time, how do they “socialize”?  Lunch?  How is that possible when lunch periods are as short as 20 minutes and when you factor in getting to the lunchroom, standing in line, etc, some kids have less than 15 minutes to eat?  That’s hardly enough time to chew and swallow a nutritious lunch.

So recess and lunch aren’t even social times anymore. 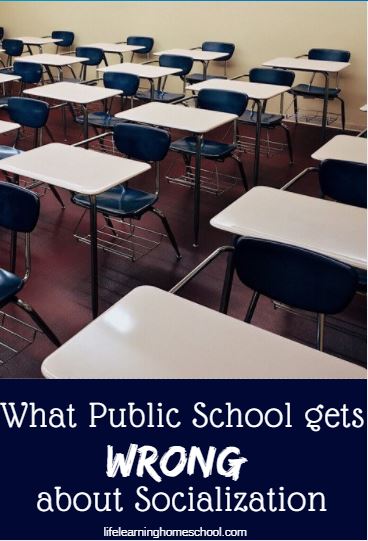 So with these SIX reasons why Public Schools are getting Socialization wrong, let me tell you what ONE thing the author of the PopSugar post said Homeschoolers are getting wrong….

Yes, that was her complaint based on her limited experience with previously homeschooled children.  They struggled to do group projects.

Now, in my experience in public school, “group project” meant, “oh great, I’m going to do all the work because I’m the only one in my group that cares about my grade”.  So one could argue that public school doesn’t even get this right.

Again, I’m very skeptical of her opinion because of limited experience with homeschoolers, AND I’ve seen plenty of homeschool kids work together as a group.  We do it every week at our co-op.  And it seems like the majority of homeschoolers are active in groups and co-ops.  So learning group skills is possible as a homeschooler.  It’s unfair to such a large portion of the population to make such a broad generalization based on preconceived notions and a small frame of reference.

2 Replies to “What Public School Gets WRONG About Socialization”