So I kicked off this blog on July 13th of 2015 with our first day of school post.  As I wrote about in that post, our first day of school did not go as planned because we had been without air conditioning in our house since Saturday night.  The repairman was scheduled to come out “sometime on Monday” when he could “squeeze us in”.  So we actually had to pack our school books and head to the library and do school there until the repairman had a better idea of when he could come by.

Flash forward to the first day of school, July 11th, 2016 and we start our day headed to the mechanic to pick up our van that we had been without all weekend.

What IS it with things breaking the weekend before school starts???  (I don’t have a blog post to confirm the dates but the washing machine broke sometime in July of 2014 too….July is NOT our month….)

But we did start our day praising Jesus that there was nothing seriously wrong with the van and no additional repairs were needed beyond the battery that we replaced the previous Thursday.

So it was still early when we got back home so the first day of school DID happen (almost) just as I planned! 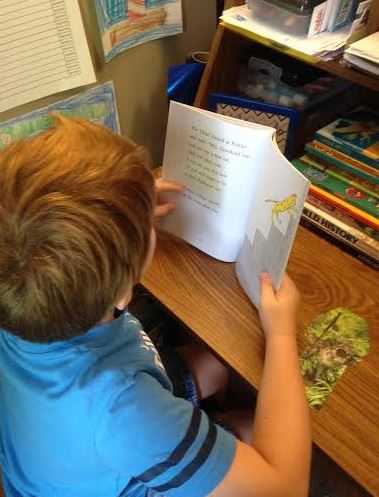 The first thing he wanted to tackle was reading.

If you want to know why we start back to school in July, check out our “semi” year round homeschool plan here.

Here are the “must do” back to school pictures:

I get my back to school sign printables here.