Literature Fair Project on Tonight on the Titanic

Literature Fair Project on Tonight on the Titanic 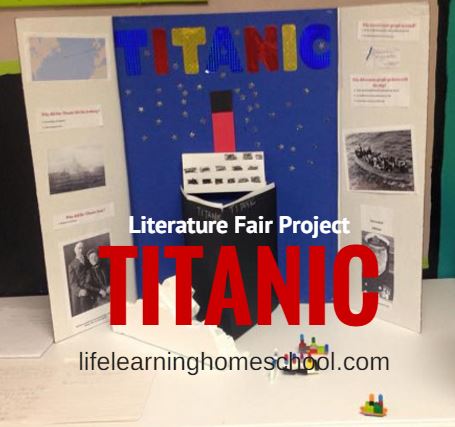 So I signed BigG up for a Literature Fair at our Co-op before I realized what it was.  HA!  To be fair, I had originally read the requirements for the age group UNDER BigG.  So I was thinking, “Oh, this is a piece a cake.”  So I signed him up.  Then when I realized what was really expected I was like, “oh dear.”

But I knew this would be good for him so we dove in.  I will say, I tried to sway his choice of books to something that I thought would still be easy.  But oh no, he would have none of it.  He was (and still is) enamored with the Titanic.  We had already read Tonight on the Titanic a while ago. And actually owned it because when we reached that book in the Magic Tree House series, our library didn’t have it!  It had been checked out and not returned like 6 months prior.  So Amazon to the rescue with 2 Day Prime shipping we had it in (almost) no time.

So anyway, I wanted him to re-read the book and he was okay with that.  As much as I wanted him to pick a different book that I thought would be easier, it was actually best that he did this one because it’s what HE wanted.  I have a feeling I got more out of him because this was HIS topic.

Here’s what was expected of him for the fair project (now mind you, he’s in the 2nd grade!):

Please tell me I’m not wrong for being daunted by that list!

So, visual aid…. “Mom, I want to make the Titanic out of paper.”

Me: *calls my dad and asks how we might fashion an iceberg.  He gives us Styrofoam from a box of motorcycle parts he recently ordered*  Yes, we can make an iceberg out of this Styrofoam.  I think….I really hope. 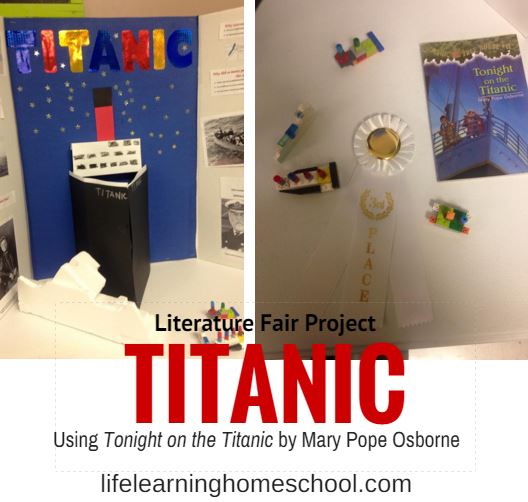 I think the iceberg turned out well.  We had to cut a few pieces to shape and glue it together.  It’s very hard to glue styrofoam.  Elmer’s isn’t going to cut it and hot glue melts it.  Just so you know.  I finally had luck with tacky glue.

I broke down the writing of the book report into manageable chunks – a paragraph a day.   The guidelines had specific things it wanted in the report.  We followed those to the bare minimum. It was 5 paragraphs so it took him a school week to do it but he did it.  The last paragraph was questions about how the book made you feel.  His read:

This book was a little scary.  It made me feel sad for the people on the Titanic.  I am glad new rules were made so that it would never happen again.

I did sway him on his research topic.  Because had I not, his report would have been 92 pages long.  He wanted to included it all.

We settled on answering these Titanic questions:

I really tried to make 3 and 4 the same thing but he wasn’t having it.  He had an idea.

The research report was twice as long as the book report but he added every fact he wanted.  Like I said above, this was HIS topic.  I kept reminding him the more things we added to the notes the more he was going to have to write.  He said, “I know, but this is important.”  If I had made him settle for something different, I probably wouldn’t have gotten the same quality out of him.

The visual aid (aside from having the Titanic coming out of it and an iceberg in front) had the 4 questions and some bullet points (we did this on the computer) and some pictures.  We were working on this project just as this story broke about the picture they think is of the iceberg the Titanic hit.  So of course that had to be included.  And a map of the Titanic’s fateful voyage.  And people on the lifeboat.  And he wanted a picture of the Captain and a couple who’s names escape me at the moment but they went down together because she wouldn’t leave him.  The pictures are a little crooked but it’s because I let him do it – I wanted them to be able to see that he did it.  😀

Now we’re down to the last thing.  A “hands on” research project – as if the reports and the visual aids were not enough.  And to make matters worse I realized 2 nights before the fair that the visual aid and project were two separate components.

CRAP.  Pardon my French.  So I’m re-reading the forms and messaging the lady in charge just trying to clarify when G comes to me and says, “Look, I made a little Titanic out of my LEGOs.  I think I can make an iceberg too.  Want to come help me find white pieces?  Maybe I can take it with my project.”

Does this kid have any idea how awesome he is?

So off I go to help him find the write pieces to make an iceberg.  And I say, “So, do you think you can make the other two ships that were in the area that night?  They were smaller than the Titanic, remember?”

“Oh, yeah.  Here’s one I made when I was trying to make the Titanic but I didn’t like it.  It can be the Carpathia.  And I’ll make the other one.” 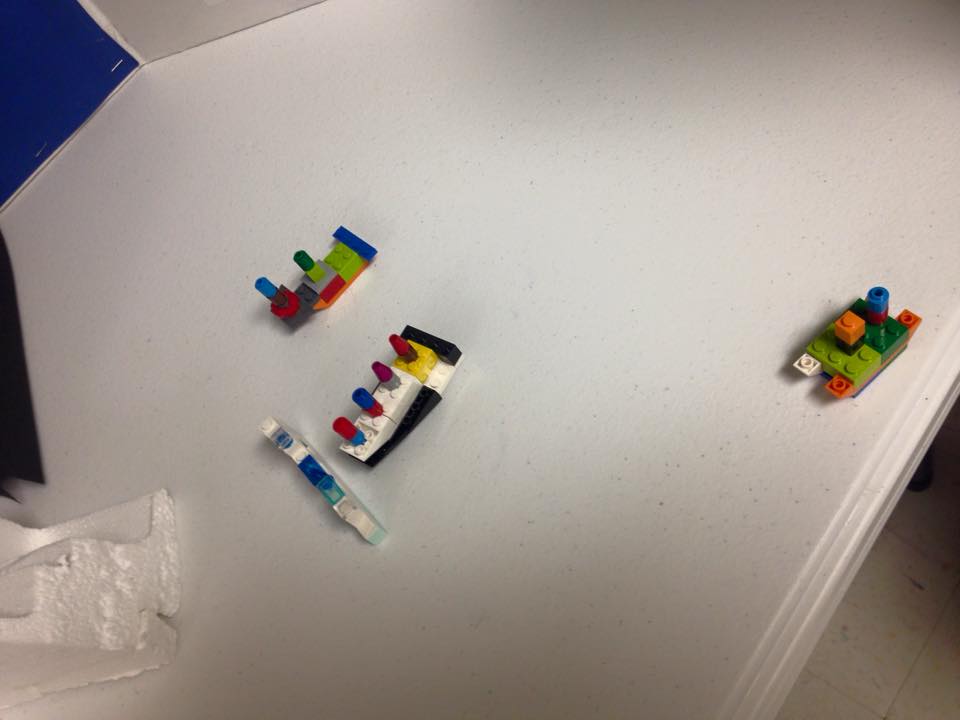 And thus our “hands on” research project was born!  He demonstrated (with ridiculous accuracy) where each ship was reported being when the Titanic struck the iceberg and why the closest ship didn’t respond and the farther away ship didn’t make it.

He had to meet with the judges and “present” his project.  Oh, how he shined!  I had to watch from outside the room through a crack in the door but I could see him and his facial expressions and gestures as he was talking.  Afterwards I said, “Were you able to answer all their questions?”  And he said, “They didn’t really have any questions because I told them everything.”

Oh how I love this kid! 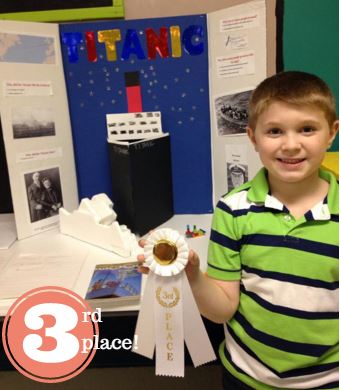 He was over the moon about his 3rd place ribbon (and so was I!)  We had talked for a couple days leading up to this that it was okay if he didn’t get a ribbon.  That he worked hard on his project and that’s what was important.  And he learned some new things and did his best.  And that we weren’t going to be upset if he didn’t win.  I wanted to prepare him.  I hope that I didn’t scare him into thinking he wasn’t going to win but I didn’t want him to get upset.

We got his score sheet back a couple weeks later with the judges comments.  He got a 99 out of 100 – so it was close among all the participants!  Which made me even prouder.  He got a 4/5 for “visual aid neatness”.  (Those pictures glued on crooked is what cost him!  lol)  That was his only missed point.  The judges comments were “well organized, creatively presented, and very knowledgeable.”

This momma could not be more proud!