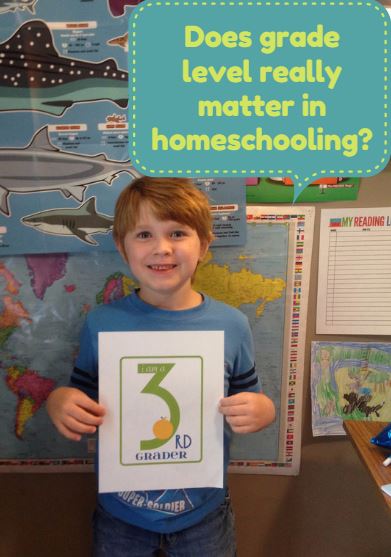 You know you’ve wondered it.  You may have even asked it.  There are many sides to the debate too.   Where do you stand?

I’m going to tell you our story first and then I’ll tell you what side of the debate I fall on.

G was writing at 3 and reading at 4.  He could add, subtract, graph and measure by 5.  Part of the reason we wanted to homeschool is because we wanted to counter the boredom that would inevitably come from being in a Kindergarten class that had nothing to teach him.

Because BOY + Boredom = Potential for Trouble

Not trouble like doing bad things trouble.  But trouble like “can’t stay in seat” and “can’t be quiet”.  He’s always been a naturally inquisitive boy drawn to learning and teaching himself.  I did not want a bad school experience to ruin that.

That worked for about 5 minutes.

Or more literally, about 2 months.

Should I say, “Well, no, you’re in Kindergarten but you can do 1st grade work so that’s what we do.”

Even at barely 6 that wouldn’t fly with his incredibly logical mind system.

And right there, in October 2014, just two months after starting Kindergarten, he was promoted to 1st Grade.

And we haven’t looked back.  As of writing this, February 2017, he is excelling as a third grader.

So there are three major sides to this debate.

#1: My kid is whatever “grade” matches his public schooled peers regardless of what his books/curriculum say.

#2: My kid is whatever “grade” his books/curriculum say.

#3: My kid just does his books/curriculum.

So which way is right?

Group #1’s kids are often involved in sports or activities outside the homeschool realm.  Keeping them the same “grade” as their peers (even if it just on paper) simplifies registrations & and team sports.  And it keeps kids with their same friends who are progressing at the “normal” public school pace.

But that doesn’t mean Group #2 is in the wrong.  We are Group #2.  We changed churches from the church G had grown up in from infancy (where he was still in the class based on his “grade” had he been in public school) to a brand new church last year and I gave him a choice.  Go to the 1st grade Sunday School class (which is the grade his same aged peers would be in) or go to the 2nd grade Sunday School class (that matches his homeschool grade).  He chose 2nd grade.  He has a fall birthday anyway so he’s always been on the older end – so even one grade up he’s still almost as old as the youngest kids in that grade.  He chose 2nd grade because our new church contains homeschool families we know – including a friend of his that was in the 2nd grade.

But Group #3 isn’t wrong either.  They don’t want to be defined by a label.

So, does that mean grade level matters in homeschooling?

Well, it only matters as much as you want it to matter.

I know plenty of #1s who would NEVER consider moving their child “up” a grade even if their work is at a higher level.

As #2s ourselves, I don’t plan on moving G “up” again.  I feel like moving him once to get his workload to match his capabilities was sufficient.  But I don’t know what the future holds so I wouldn’t be opposed to it in the future.

And the #3s – more power to you.  Your kids will be the ones graduating high school with a 2 year college degree simultaneously at 16 years old.

There is no right or wrong on this issue.

If there is anything I could go back and tell my “new-to-homeschooling” self it would be to not worry about “labels” and how things are “normally” done.

As a “third grader”, G’s language arts and reading curriculum is for 3rd grade.  But for “fun” he reads books at a 5th grade level. His math is 3rd grade but it leans toward being slightly more advanced than other math programs.  His science isn’t even a grade.  It’s just “science”.  Same with history.

We still like to mark the start of each new year with the first day of school holding the “grade” sign. But I no longer let it define us or hold power over us.

Which group do you fall in?