Wrap-Up: The Week with the Worst Day Ever & the Beauty of Homeschooling

Wrap-Up: The Week with the Worst Day Ever & the Beauty of Homeschooling

Do you school on Fridays?  We do.   But this particular day we are getting a late start.  We both slept in (it was fabulous!)

One thing I love about homeschooling is that I can say “yes” to staying up late the night before Hubs has to go back to work.  He works an “on 4, off 2” schedule.  With a 45-55 minute drive depending on traffic, even on his earliest shift days he’s not home until 7pm.  So G gets precious little time with him those 4 days he’s at work.  So I don’t mind saying “yes” to an extra hour.

Because we don’t have to be up early in the morning to catch the bus or make it to car line.

Sleep is a beautiful thing.

I’m convinced after my years in the Early Childhood Education field and just observing my own child these past 7 years, that children are sleep deprived.  G slept 12 hours last night.  And I actually woke him up this morning – he might have slept longer if I had let him.  Even on a normal night with a normal bedtime after a normal day he’ll sleep a solid 10, maybe 11 hours.  If I had to get him up for school every morning he would have to go to bed at 7:00 to get enough sleep!  As it stands, bedtime is 8. And it works for us.  He has karate and training times can vary from 5-6pm, 6-7pm or 7-8pm.  We rarely go to the latest class because we have a 20 minute drive to get back home and class usually runs a few minutes over so we’re not getting home until after 8:30.  But there are kids his age that do the 6-7pm classes and the 7-8pm classes!  And they have to go home, get ready for bed and be up early the next morning!  I know they have to be tired!

When I was teaching preschool I had a class where 4 of the boys in my class were on the same baseball team.  They were all 4-5 years old and there were days they looked like zombies!  If I mentioned how tired the seemed in class to the parent, I would hear, “Oh the ballgame before theirs ran late so they didn’t take the field until almost 8:00.”   WHAT?!?!  What business do 4 and 5 year olds have being on the ball field at 8pm???  I get that the game before them ran over – but even if the game had started on time it was still too late for 4 & 5 year olds to be on a baseball field!  They should’ve been at home in their jammies having a bedtime story read to them!

I feel like we (as a society in general) are programming our children to be sleep-deprived.  For the non-homeschooled child though, it seems that the only way to get adequate sleep is to be un-involved.  If you participate in a team sport or take some sort of lessons/training as a group (karate, dance) then you are subject to these later times if you want to participate.  Why?  Because they have to set times around parent work schedules.  You can’t have a 4 or 5pm practice because there is no parent to get the child there at that time.  So the only other option is to cut into the time the child should be resting.

Ok, I really chased a rabbit there.  I said all that to say that I’m glad G can get the sleep he needs.   I don’t think a 7 year old is going to sleep in just for the heck of it or out of laziness.  If he sleeps until 9am it’s because that’s what his growing little body needed to rest and recover and be ready for the day ahead.

But this week, I learned and even more important lesson than how great sleep is.

I learned the lesson of grace in homeschooling. 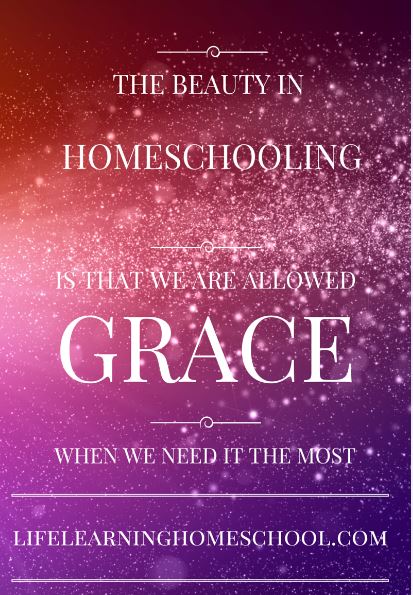 You see, we had our worst day of homeschool EVER this week.  And you can read all about it here.

But I learned this week that homeschooling is all about grace.

I screwed up this week.  God’s Grace was there.

At 2:30 in the afternoon I threw my hands up and said “We’re done!”  Not in a bad way but in a “the world won’t end if these last two assignments don’t get done” way.  That’s the grace I allow myself.

And I extended that to my son – calling it a day took a burden off his shoulders.  He was done.  There was nothing else productive going to come out of him that day.  Forcing him to finish would have been purely a power play on my part and the lessons would not have stuck.  So I gave my son grace.

So that was our week and my take-away from it.  Thank God for Grace!

Thanks to Weird Unsocialized Homeschoolers for having a weekly wrap-up every week!

3 Replies to “Wrap-Up: The Week with the Worst Day Ever & the Beauty of Homeschooling”